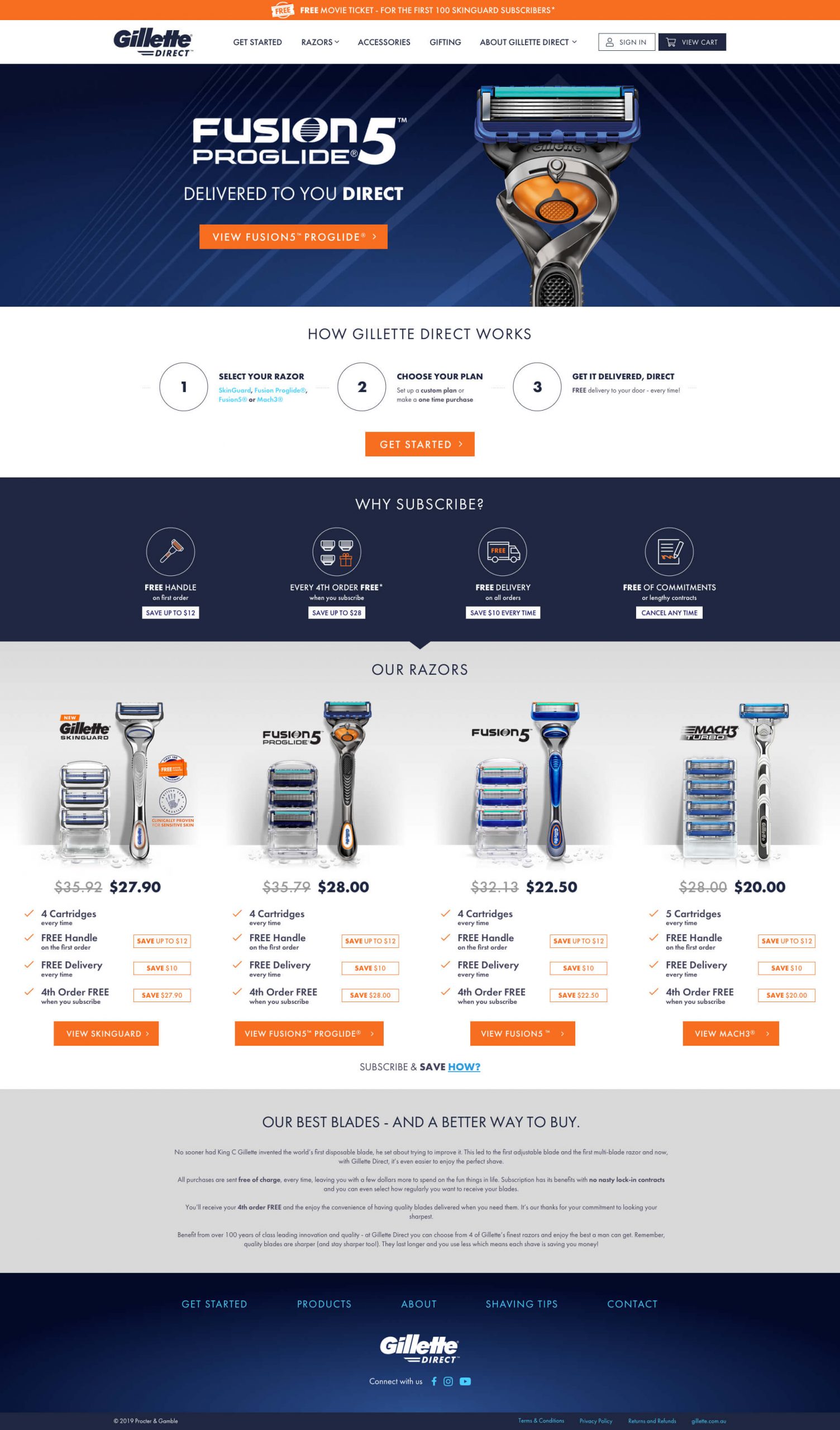 The brief
Ten Four was initially contracted to provide lead generation in preparation for the launch of Gillette Direct in Australia (the online subscription platform for Gillette).

Ten Four’s role has been to define the strategy, performance modelling, deliver ongoing media and creative, manage optimisation and data analysis. They have also been heavily involved in website UX and CRO.

350 orders were received in the first 15 hours of launch and targets were achieved.

Ten Four has subsequently been engaged to advise on the strategy and the buying of performance media for the wider needs of Gillette brands.

Working in synergy with multiple agencies, we were unable to directly influence the design of the site, yet as time went on it became clear that the site design and UX was negatively impacting sales. It was time to take initiative.

I analysed key points of friction and constructed a set of appropriate responses. With these new patterns at the forefront, my next move was to roll out high-fidelity mockups, presenting a clearly defined user journey from homepage through to checkout.

I brought my work to the attention of our internal team, explaining my reasoning and the end goals in mind. From that point it was decided that we should ‘throw our hat in the ring’. Taking on their feedback I further refined the design and expanded upon the cart functionality. The result was a marked departure from the site at launch, pushing it firmly onto the stage alongside its competitors.

With the mockup in a good place, it was time to present to the decision-makers at P&G. Two statements stand out in my mind:

“Why aren’t we doing this already?” and “Don’t worry about the cost – just make it happen.”

Ten Four’s role expanded from that day on; transitioning from an ancillary agency providing media buying and marketing insight into a pivotal role responsible for end-to-end program initiatives.

Klaviyo was deployed as a foundation for lead generation, transactional emails, and customer retention. I was responsible for setting up campaigns and flows, defining segments and lists, as well as design and code of EDM templates.

With so many moving parts it was important to plan each step of the user’s journey and identify all possible actions and their consequences. To do this I used draw.io, mapping the interactions and triggered events along the way.

With a corporation as expansive as P&G, expectations were high to deliver outstanding results – and a dashboard is essential to get an overview of eComm performance at a glance.

This is familiar ground, however we soon learned that we had a limited selection of tools at our disposal. Risk management constraints were such that we were unable to utilise our favoured connectors – data retrieval could only be partially automated at best.

So, I needed to get creative.

Using Google Sheets I sanitised and aggregated data that was manually exported from the website, Facebook and Google Ads. This then formed the data source in Google Data Studio.

Over time I refined this process, utilising hotkeys and JS to scrape each platform. While a far cry from API integration, this provided greater efficiency and accuracy and has been sufficient thus far.

I also crafted the dashboard in its entirety – this forms a central piece in decisions regarding advertising, product and site performance.